If Politics Is A Blood Sport, Politico Seeks To Put More Skin In The Game 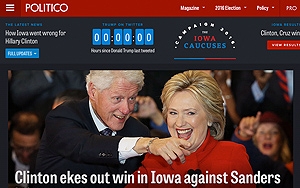 Politico is upping its political game as the 2016 election cycle kicks off in earnest with the Iowa caucuses.

On Monday, Politico debuted a content approach it refers to as “Stadium Moments,” which seeks to generate an intense cycle of multimedia coverage before, during and after key political events, like debates, primaries and conventions.

Politico wants elections and key political events to become the equivalent of The Super Bowl in terms of engagement.

The “Stadium Moments” concept is akin to what a company like ESPN does well — it surrounds fans with immersive coverage and interactive experiences that invite them to engage deeply with content and share with one another on social media.

The new approach will leverage video, data and other forms of multimedia, according to Peter Cherukuri, EVP of business development and president of Politico Focus, the publisher’s research, data services and branded content business. “We want to help our readers consume different types of content. We want to offer insights in different formats to our audience of political influencers.”

The goal, he added, is to "provide our readers with the maximum experience to appreciate all the parts of our journalism and to understand all of these big political moments.”

Politico also hopes to create a long-term connection with marketers, a sense of exclusivity and connections that have the same value, scale and engagement as high-profile sports events.

The company is eager to get advertisers excited about “Stadium Moments.” Beginning with the Iowa Caucuses, editorial coverage will run over the course of at least two days. The thinking is that this type of special-event coverage will appeal to advertisers with robust stories to tell.

The first three “Stadium Moments” are supported by The Innovation Alliance, an association that represents patent holders. The Alliance’s sponsorship revolves around stories about the history of American inventors. The native-like ads carry a “presented by” label.

Cherukuri said the “Stadium Moments” approach will not affect how Politico covers news. “The idea of a digital stadium or stadium moments is to try to understand events like politics, where people gather in online platforms because they have a shared interest in those political ‘moments.’ ”

Increasingly, election coverage has become a highly commoditized and fragmented experience — and Politico wants to change that, he added.

“We have to give our readers a reason to turn to us as a destination. There’s a lot of value in readers going to their feeds to follow the arc of a ‘moment’. We want to optimize how our readers are gathering with other readers around their shared passion around politics,” Cherukuri said.

Cherukuri hinted that Politico will do live programming for select events — the conventions, for example. And it will continue its European expansion and extension into U.S. states and statehouses. Burson-Marsteller recently rankedPolitico Europe the most widely read site by EU influencers; the BBC came in second.

The news comes on the heels of the Jan. 29 announcement that five top executives, including Politico co-founder and CEO Jim VandeHei, top political reporter Mike Allen and CRO Roy Schwartz, will leave the company after the general election in November. VanderHei has said he plans to launch his own business.

The timing of the announcement raised eyebrows--why were the departures announced during what is arguably Politico's most high-profile, intense news period? Published reports speculated about clashes between VanderHei and Robert Allbritton, Politico’s founder and publisher, over strategy, direction and expansion into Europe and states throughout the U.S., among other issues.

Cherukuri told Publisher’s Daily: “There were zero disagreements about the future of Politico between our publisher and any of the people who are leaving. Jim has taken the company as far as he can take it and has put a management team in place. He has his own aspirations to start and own his own company.”

Roughly, Politico’s revenue is 50% based on the audience-supported advertising business and 50% on its subscription business, Politico Pro. The expansion into Europe and the states is intended to grow the Pro business. Cherukuri declined to put a percentage on branded content/native advertising.