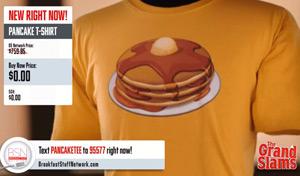 Denny’s is looking to build on the audience success of its “Grand Slams” video series and deepen engagement and loyalty with existing fans with a new social campaign offering free, branded merchandise as an incentive.

The latest episode of the stop-motion, animated series — viewable on www.thegrandslams.com and Denny’s’ YouTube channel — shows the series’ “Bacon” and “Sausage” characters promoting the free items in a QVC-like format called “The Breakfast Stuff Network.”

The animated characters offer several free “breakfast accessories” items — including an “egg hoodie,” a “bacon candle” and a “pancake T-shirt” (shown here) — to fans who text the item’s identifier word and number. That takes them to the Breakfast Stuff Network site, where they can choose one item, which will also be shipped to them at no charge, while supplies last.

Each item will be sent and packaged with a thank-you letter from “Bacon” or “Sausage.”

Denny’s is promoting the offer by featuring the video (dubbed “Zero Easy Payments”) on its social media channels.

Dillon says that Denny’s will be introducing new episodes throughout 2016.