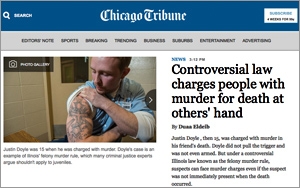 Chicago Tribune moved from a premium content strategy to a metered paywall today, in an effort to increase digital subscriptions.

The paywall gives nonsubscribers access to up to 10 articles per month on chicagotribune.com before being asked to subscribe.

“Now, nonsubscribers can sample any story, up to that monthly limit, before deciding to subscribe,” Tribune editors told readers in an announcement posted on the Web site.

Subscribers will continue to have full access to Chicago Tribune’s stories, photos, graphics and videos, as well as access to the news app and daily access to the digital edition, a digital replica of the printed paper.

An example of the paywall content are articles from its independent columnist Robert Feder, who covers local media.Feder called this move to a metered paywall “a change for the better” on a post on his site.

Other stories once hidden behind the paywall include news exclusives, investigations, editorials, sports columnists and arts reviews.

Previously, users would see a small blue “+” sign on some stories, indicating they would have to register and subscribe in order to read the story. Other stories were free. Now, nonsubscribers can sample any story before deciding to subscribe.

The readers who signed up for a premium content subscription — called digitalPlus — get moved over to the Unlimited Digital Access subscription program.

It’s a growing trend for publications to move from a strict paywall to a metered paywall. For example, The New York Times and Newsweek also dropped their paywalls recently, reflecting the industry’s challenge of collecting revenue from online content.

Chicago Tribune's digital subscription package costs between $1.99 to $1.59 per week, depending on whether the reader signs up for a quarterly, annual or two-year commitment. The publication offers the first four weeks at 99 cents.
newspapers, pay wall
Next story loading