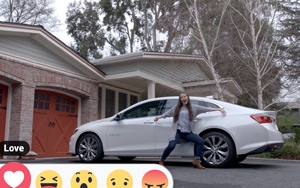 Can you sell a car with an emoji? Carmakers have been trying for a while now. Maybe Facebook can help.

Chevrolet’s new online videos use the Facebook Reaction buttons, an evolution of the “like” button, now extended to include other human feelings.

The automaker this week launched a minute-long video (also on Facebook, obviously) that plays on the clever idea that “like” doesn’t really do justice to how you should feel about the new 2016 Malibu sedan. Thankfully, there is now a “love” button, so you can really express how you feel.

The message is delivered with a montage of moments and people reacting to them by touching the “like” thumbs-up button on Facebook. “We’ve become a nation of ‘likers,’” says the voiceover. Viewers then see a newborn with her mom. “A whole new life is created. We ‘like’ it.” After a flip-book of moments of people liking things for different reasons, we wind up with the new-car experience. “Chevrolet looked out into a sea of likes,” says the voiceover, “And thought the time was right…to love.”

As the spot closes, we see a finger hit the like button, opening the new Reaction button keyboard, and the finger touches the heart-shaped “love” emoji. The effort is paired with another unusual Chevy campaign involving a long-form in-cinema ad touting Chevrolet smart technology that is meant to look like the trailer for a horror movie, and was, in fact, shot by genre auteur Sam Raimi.

Indeed, emojis of various kinds have been haunting the automotive marketing space for months now. Chevrolet last year drove a lot of earned media with this emoji-hieroglyph press release to tout the Chevy Cruze, at #ChevyGoesEmoji.