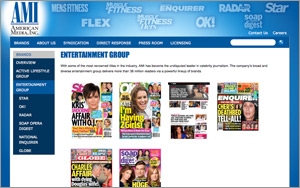 He will continue to report directly to AMI executive vice president and group publisher David Jackson.

In a statement, Goldstein said he plans to develop “new and exciting opportunities” and platforms around AMI’s digital assets. AMI chairman and CEO David J. Pecker stated that Goldstein’s successful leadership of Star proved he could head AMI’s entertainment titles.

Goldstein joined AMI in 2009 and most recently served as vice president and group publisher of Star and National Enquirer.

In his time at AMI, he spearheaded a recent rebranding of Star that resulted in more than 30 new advertising accounts, according to the statement.

In 2015, Star and OK! accounted for more than 30% of the celebrity weekly advertising market with approximately 2,500 combined advertising pages. Additionally, starmagazine.com increased its unique visitors by 155% year over year.

“By bringing together OK!, National Enquirer and Soap Opera Digest under Neil's leadership, we can better leverage the scale and creativity of the AMI Entertainment Group to deliver compelling and engaging marketing solutions for our partners," Pecker stated.

The National Enquirer has seen a lot of growth, as well. In December, the company released a new mobile smartphone app for the tabloid brand and introduced a German-language edition of The National Enquirer in January, marking the first time in the Enquirer’s 25 years to launch an international edition since the UK Enquirer.

The app launch followed an increase in both social media traffic and mobile traffic for the publication, at 64% and 108% growth year-on-year, respectively, according to The Association Of Magazine Media's monthly "Magazine Media 360 Degree" report.