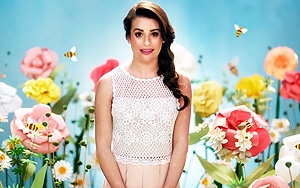 In a campaign it hopes will lead to both increased sales and more flowers for pollinators, Burt’s Bees has launched a social media campaign starring actress Lea Michele.

The ads encourage women to “Lose the Bs” in a social media post, then use a #BringBackTheBees hashtag. For every post, the brand — owned by Clorox Co. — says it will plant 1,000 wild flowers so the bees will have more places to get busy and pollinate. The Durham, North Carolina-based company says the goal is to plant 1 billion flowers as a result of the effort.

The campaign is from Baldwin&, based in Raleigh, North Carolina, and includes a 70-second video as well as a 15-second version.

About 70% of the media budget is going to paid social, including Instagram, Twitter-promoted Tweets, and a promoted Trend, and white-listed Celebrity Tweets from Lea Michele and others. About 17% is earmarked for BuzzFeed, with the balance for online pre-roll targeting young women with cause-related and beauty/lifestyle interests. (AKQA is the media agency.)

Both the company and the agency are having fun erasing the letter B where ever they can, including the packaging for a limited-edition version of Pink Grapefruit, Coconut and Pear, and Wild Cherry lip balms (since those are the flavors that most rely on pollinators), and adding #BringBackTheBees.

It’s a category where social media is increasingly important, reports Mintel, with 21% of women between 25 and 34 saying they like or follow make-up brands. Across all ages, 55% of women say they use some sort of lip make-up regularly.

Those lip products are driving sales these days. In its most recent quarterly earnings, Clorox says its natural personal care sales grew in the mid-double digits, thanks the launch of Burt's Bees lip color products, a strong holiday performance and ongoing demand for its facial towelettes.