Publishers Turn To Email To Engage With Readers 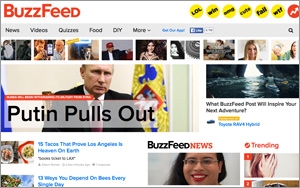 “Email marketing is being relied on more heavily today than ever before, and the data indicates that publishers depend on it even more than most,” says Nicholas Einstein, vice president of research and principal analyst at The Relevancy Group.

The study was sponsored by PostUp, an email service provider, and surveyed more than 400 executive marketers in winter 2015.

Kraig Swensrud, CMO at Campaign Monitor, says that email newsletters are one of the five top traffic drivers to Buzzfeed.com, which has been working with Campaign Monitor for three years.

“What’s really interesting about BuzzFeed is that they’ve taken it to a whole new extreme,” says Swensrud. “It’s amazing to see how they’ve grown -- they’re a big pioneer in leveraging emails in the publishing industry.”

BuzzFeed now offers a dozen email newsletters, varying from daily inbox news updates to more targeted content, such as its “Dude A Day” and “Dog A Day” newsletters.

Although BuzzFeed was unable to provide specific ROI data points on email’s success to their business, Swensrud confirms that the media company uses Google Analytics to analyze how channels and campaigns are performing, and that email has become a crux of readership engagement for the media company.

BuzzFeed has an average of more than 10 million global visitors a day, per Quantcast.

Swensrud relays how email marketing is becoming more and common in the media industry as publishers turn to new ways to continuously stay in touch with their readers.

“Publishers, who rely on email even more than others, have specialized requirements, and often need to leverage different strategies, tactics, and tools to drive their core business objectives,” says Einstein. “Those who allocate resources on six key areas of focus will be well positioned to take advantage of the tremendous opportunities that channel proliferation, and the current evolution towards distributed content, currently present.”