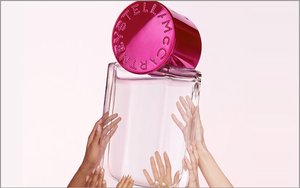 In an era when prestige fragrances are staging a comeback, Stella McCartney is banking on a whole new way to win with the tender edge of Gen Y, introducing Pop later this year. Calling it the “scent of a new generation,” the design company is targeting young 20-somethings with a luxury fragrance that is both modern and irreverent.

But the campaign, directed by Melina Matsoukas and filmed in the California desert, is meant to be more than just a literal joyride. “These girls are on the verge of big things, about to take on the world and become the women they want to be,” the company says in its release. “These girls are about to POP.”

To make Pop, the company is using more sustainable methods of pressing and processing oils from tuberose and sandalwood, and noting that this bio-mimicry technology focuses saves one sandalwood tree for every 2,500 bottles it produces. Packaging is also engineered to have less impact, and the matching shower gel and body lotion will be sold in 100% recycled plastic tubes.

The launch comes amid a perked-up period for fancy fragrances. In a new report, the NPD Group says that while skincare products have dominated prestige channels for the last decade, led by Baby Boomers who wanted more wrinkle cream and less perfume, scent-loving Millennials have turned the tide. “For the first time, the fragrance category contributed more annual dollar gains than skincare,” the Port Washington, N.Y.-based market researcher says. “Anti-aging is becoming less prominent.”