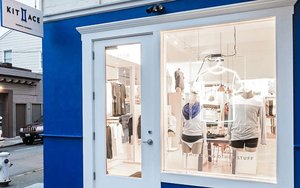 Kit And Ace, the trendy apparel retailer that has its roots in Lululemon, is introducing pop-up shops in seven chic hotels, hoping to build on its appeal to comfort-loving travelers.

Called The Carry-on, the pop-ups are opening for a few days each in San Francisco, L.A, Melbourne, London, Sydney and New York, offering a pared-down collection of the company’s travel-friendly duds. “The idea came from the feedback we got from people about how great our clothes are to travel in,” says JJ Wilson, co-founder of the brand. “It wasn’t what we were expecting. But every time I get on a plane, I see three or four people in our clothes. It just seemed like a natural way to make a connection.”

Wilson started the brand two years ago with Shannon Wilson, who is married to his father Chip, the founder of Lululemon. “The roots of the company are in Shannon’s expertise with technical fabric, and we wanted to make clothes out of this technical cashmere. It’s a fiber with noble roots, but we wanted clothes that are washable, preshrunk, with flat seams, and that don’t pill or snag. And while we wanted them to be as comfortable as clothes you’d work out in, we wanted them to look like clothes you’d wear all the time, not just at the gym.”

Since then, the start-up has opened more than 60 stores, and like Lululemon, he tells MarketingDaily, they focus on building local communities. Each store compiles something called The List, which might include anything from restaurant and club ideas from its influencers to cool hotels in the area. That also provided an easy connection, he says.

Lululemon is something of a pioneer in the athleisure space, pioneering yoga clothing so comfortable it started to infiltrate women’s regular wardrobes. Kit and Ace is also based on that idea of comfort, but takes it out of the gym. It also tries to harness a broader gestalt of transparency: Its Web site traces the fibers it uses from Inner Mongolian goats, who shed their fleece in April, right to the racks. Marketing relies heavily on festivals, with its copper Airstream making appearances from South X Southwest to Coachella.

Despite those Gen Y-loving tactics, Wilson says Kit And Ace has appeal beyond just Millennials. “We’ve been surprised, and initially thought our appeal wouldn't go much higher than 45. But we have customers from 16 to 60.”

While he declines to discuss revenues for the start-up, which is introducing a line of technical silk products soon, he says it intends to open an additional nine shops this year.