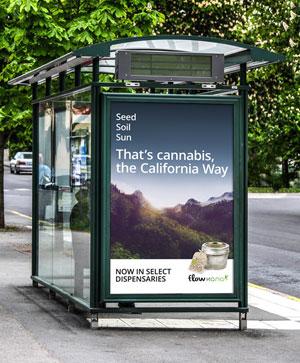 As full legalization of marijuana sales ramps up over the next two years in California, there is growing concern that corporate interests will hold sway over the state’s cannabis farmers.

To address that concern and in advance of April 20, considered by those in the weed culture to be a national holiday, Flow Kana, a marijuana wholesaler founded in 2015, is launching an advertising blitz with omnichannel marketing.

The new ad campaign, titled "The California Way," uses images and quotes from actual California cannabis farmers to personify the tens of thousands of individuals, families and collectives who together comprise California’s most lucrative agricultural industry. Medical marijuana sales in California hit $2.7 billion last year, accounting for nearly half of all legal marijuana sales in the country, The New York Times said, citing cannabis research companies.

Emphasizing the need to honor California’s farmers and their unique challenges, The California Way advertising blitz is supplemented by digital ad placements on Facebook, Twitter and Instagram. Outdoor and out-of-home ads will also be included.

“We are focused right now on wholesale,” Michael Steinmetz, a founder and CEO of Flow Kana, tells Marketing Daily, “which means getting our brand all over California dispensaries. At the same time, we offer on-demand delivery in less than 20 minutes throughout San Francisco, Oakland and Berkeley. Our goal is to continue to expand this service, with exclusive partners, all over the state, and specifically, the larger Los Angeles area by Q3 2016.”

Flow Kana expects its ads to generate 15 million impressions across online and offline channels during the campaign period.

In addition to its omnichannel marketing campaign, Flow Kana is also launching a cultural alliance: The California Way Consortium. This collaboration unites like-minded organizations who believe that the California cannabis industry must come together to plant the seeds for a future of sustainable, small-batch cannabis grown by generations of independent farmers. The consortium is set to commence on April 22 at the Earth Day Film Festival in San Francisco.