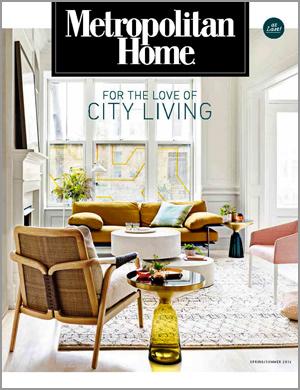 Hearst Magazines is bringing back Metropolitan Home for a pilot issue, seven years after it was shuttered.

The issue is available today in Barnes & Noble, Whole Foods, airports and independent newsstands in 14 cities.

The shelter title was shut down in 2009 by its parent company, Hachette Filipacchi Media, a subsidiary of French publisher Lagardere Media. Lagardere was bought by Hearst in 2011 and the defunct Metropolitan Home was included in the deal.

Now, Hearst is bringing back the title as a test, per The New York Times. If advertisers and readers take to the magazine, Metropolitan Home could eventually return as a quarterly.

There are also two branded content units from Design Within Reach and Crate & Barrel. The multi-page spreads were designed to “harmonize with the editorial content resulting in an enhanced reader experience,” according to a statement.

The spring/summer issue of Metropolitan Home has 70,000 copies on newsstands, with another 45,000 going to subscribers of other Hearst magazines, such as Elle Décor, Town & Country and Esquire.

Newell Turner, editorial director of the Hearst Design Group, is the editor in chief of the pilot. According to Turner, Millennials — the children of the original baby boomer audience — are now buying homes. But few design magazines are targeting these “new urbanists.”

Added Kate Kelly Smith, Hearst Design Group senior vice president and group publisher: “We’ve identified a new audience of Gen Xers and first-wave Millennials who are reaching an age when creating a home that reflects their style is becoming increasingly important. We’re engaging with a new community of influencers exploring their own definitions of modern living.”

The issue contains features on contemporary design, shopping, entertaining and real estate, as well as “the stylish and fascinating people who are making homes, starting careers and building communities that are rapidly changing modern cityscapes,” according to a statement.