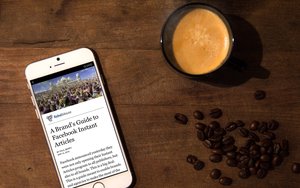 Among the raft of new productsand features unveiled at Facebook’s annual F8 conference, the social network bowed a number of new initiatives intended to make it even easier for publishers to distribute content on its platform. That included a new partnership with social publishing content management system RebelMouse, now available to publishers on Facebook via an integration with Instant Articles.

The RebelMouse platform works with a variety of different content types, including native videos, GIFs, ads, and slideshows. The partnership with Facebook’s Instant Articles has been in the works since last fall, when the partners first started working together.

RebelMouse CEO Paul Berry stated: “RebelMouse is the first publishing platform built and optimized for social media distribution. We believe it should be easy for content creators to go meet their audience where they live, so Facebook Instant Articles wasn't a choice for us, it was a natural extension.”

As noted, Facebook has been aggressively wooing publishers with a range of new features. Earlier this week the social giant announced that it would allow them to publish branded content on behalf of advertisers on its platform. Defined as any content that specifically mentions a third-party product, brand, or sponsor in posts on their verified pages, that included text, photos, videos, Instant Articles, links, 360-degree (virtual reality) videos, and live videos.

On the consumer-facing front, Facebook revealed that it is rolling out several new Messenger features, including Links and Codes, which are simple ways for people to begin conversations with other people and businesses. Facebook also revealed plans to prominently place a video tab in its Messenger app.