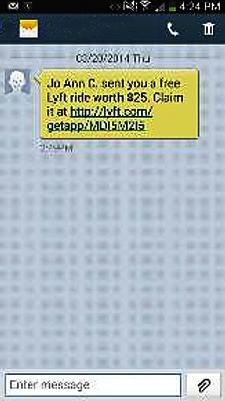 Transportation company Lyft did not violate a federal text-spam law by allegedly running a marketing campaign that enabled users to send SMS invitations to their friends, a federal judge inSeattle has ruled.

"'Invitational' messages sent at the behest of existing users of an app or system do not fall within the ambit of the statute," U.S. District Court Judge Marsha Pechman said in a ruling issued Friday.

But the decision wasn't a total victory for Lyft: Pechman also ruled that consumers could proceed with allegations that the company violated Washington state laws, including one prohibiting unsolicited text ads.

The ruling stems from a 2014 lawsuit brought by Lyft against Kenneth Wright, who alleged that he received an unsolicited invitation to join the service. That message, received on March 21, 2014, said that one of Wright's friends was inviting Wright to join the service, and offered him $25 toward a ride. The message also had a link to a site where he could redeem the coupon.

Wright alleged in a potential class-action that the messages violated the Telephone Consumer Protection Act, which prohibits the use of automated dialers to send SMS ads to people without their consent.

Pechman rejected Wright's argument, ruling that Lyft's invite-friends tool was TextMe's tool, which was approved by the Federal Communications Commission. The FCC said in an order issued last July that TextMe's tool doesn't itself "send" invitations to users' friends. Instead, according to the FCC, TextMe's platform asks users for permission to access their contacts, and also asks for permission to invite their friends.

"The FCC’s TextMe ruling resolves whether this form of user-generated invitational text message falls within the restrictions of the TCPA," Pechman wrote. "The answer is 'no.'"