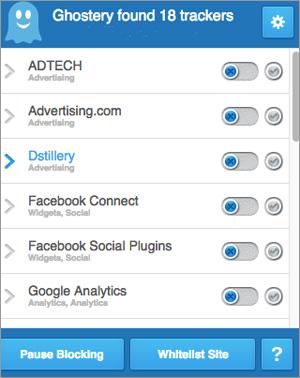 Ghostery, which offers consumers the ability to block ads from third parties, wants to work with Internet service providers to enable ad blocking on the network, CEO Scott Meyer says.

"We have millions of people who use Ghostery to manage their preferences inside of their browser, making decisions on the site they are on, the type of technology and other options," CEO Scott Meyer writes Wednesday in a blog post. "We're in discussions with leading ISPs and Mobile Carriers to bring this solution to the network level."

Ghostery has long offered consumers software that allows them to block ads from ad networks and other third parties on a company-by-company basis. Currently, consumers who use Ghostery download its software as a browser extension. The program then prevents the browser from loading ads and other material served by third parties.

Now, Ghostery wants to take that model to broadband carriers. The idea is that consumers could opt out of online behavioral advertising on a company-by-company basis, and Ghostery would enable cable companies and telecoms to enforce those opt outs by blocking the third-party ad-tech companies from reaching those consumers.

Some Internet service providers abroad are already blocking ads at the network level. For instance, Jamaica-based network operator Digicel is working with the company Shine to automatically block ads.

In the U.S., carriers that unilaterally prevented companies from serving ads to its customers might violate net neutrality rules, which prohibit broadband carriers from blocking or degrading content.

But unlike the technology used by Digicel, Ghostery only blocks ads at the direction of consumers. For that reason, broadband providers probably wouldn't violate net neutrality rules by allowing Ghostery to block ads at users' direction, according to Matt Wood, policy director for advocacy group Free Press.

In addition to offering ad-blocking technology to consumers, Ghostery also serves as a technology vendor to the self-regulatory group Digital Advertising Alliance.

Meyer adds in his blog post that he disagrees with the Federal Communications Commission's proposal to require broadband providers to obtain consumers' opt-in consent before engaging in online behavioral advertising.

"If ad tech companies can continue to drop cookies on an opt-out basis, why can’t the ISP utilize their own proprietary assets, in which they have invested billions of dollars, to compete on a level playing field?" he writes. "This double standard demands further examination and conversation."