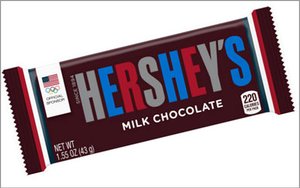 As part of its official sponsorship of the U.S. Olympic and Paralympic teams for this summer’s games in Rio, The Hershey Company is changing the instantly recognizable packaging designs of its leading candy brands to create limited-time special editions that feature red, white and blue elements.

That includes changing the iconic silver lettering on the 122-year-old Hershey's Milk Chocolate Bar for the first time (shown).

The special packages will be available nationally in stores, Hershey’s Chocolate World locations and online at Amazon starting May 6.

They were unveiled at an event on April 27 at Hershey's Chocolate World Attractions in New York City and the company’s Hershey, Pa., headquarters.

Hershey also announced that it has added three athletes to its Olympics brand ambassadors team: 2012 U.S. wrestling gold-medalist Jordan Burroughs; 2012 U.S. Paralympic swimming gold-medalist Mallory Weggemann; and Hershey, Pa., native David Nolan, who will be “supported by his home town” in his bid to make the U.S. Olympic swimming team for the first time, says the company.

An Olympics-themed campaign for Hershey’s chocolate will include creative featuring Burroughs and Weggemann as they prepare for their trips to the games, reports the company.

In addition, Hershey is launching an Olympic-themed sweepstakes, according to the Hershey Team USA sponsorship site.

Hershey has committed to being an official sponsor for the Olympics and Paralympics in 2018 and 2020, as well.