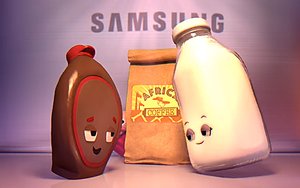 Kristen Bell and Dax Shepard are back for another round of attracting Millennial attention to the appliance category, this time with a view inside their refrigerator.

The celebrity pair, who appeared in a holiday campaign for Samsung Mobile two years ago and in an effort for Samsung appliances last year, are back once again depicting a version of their hectic home lives and the aid that Samsung brings to them.

“Their family is growing and evolving, and the ebb and flow of life is woven into the story,” Katie Cheng, vice president of home appliance marketing for Samsung, tells Marketing Daily. “We take a lot of relatable things that happen [to everyone] and they make it their own.”

In a commercial that began airing this week, Shepard and Bell (whom Cheng called the “quintessential Millennial couple”) promote Samsung’s “Family Hub” refrigerator, which connects to the Internet, allowing for instant grocery ordering and delivery, entertainment options and a smartphone view inside the fridge. The spot shows the parents preparing for their daughter’s birthday party, where they replenish their supply of “squeezy yogurts” and checking for groceries while at the store. The spot ends with Shepard sending a note to Bell (via the on-fridge screen) to look inside for a special cake.

The commercial is an extension of a short film Samsung has been running in theaters for the past few weeks. The largely animated film uses Bell and Shepard as bookends to set up the action of a lonely container of chocolate syrup looking for a milk partner (which Bell and Shepard forgot at the store and have to run out to get). Although the film is no longer appearing in theaters, it will remain on Samsung’s social channels.

“We wanted to do something fun and different as we launched into the campaign,” Cheng says of the film. “It’s easy to talk about home appliances in a cold, functional way. This animated piece of finding love and belong is universal.”

Samsung is supplementing the broader television effort with shorter videos (not featuring the celebrity couple) with digital videos exploring many of the Family Hub’s other features in greater depth, and a cover takeover with Conde Nast’s Bon Appetit magazine.

“We have so many different elements and traditional media, this truly is a 360-degree launch,” Cheng says.