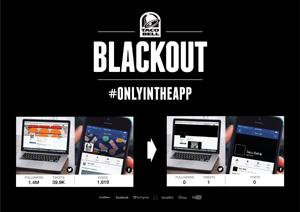 Challenge: Our objective was to drive downloads of Taco Bell’s new mobile ordering app by generating mass awareness and social conversation amongst Taco Bell’s most engaged fans across the social web. How could we get them to notice our news and motivate them to tell the rest of the world? The answer: a simple deprivation strategy, take away what they love most—Taco Bell’s witty social presence—to create mystery and intrigue around launch. The idea was to blackout Taco Bell’s social media accounts for 72 hours and reveal that the only way to Taco Bell was in its mobile app.

Solution: Taco Bell has an intensely loyal fanbase with an active social following across all of their social channels.  Therefore, the primary target was the socially engaged Taco Bell consumer with a high propensity to share. We activated this fanbase as they are most likely to download the app and share our message.  The message would then be further amplified to those who had friends who followed Taco Bell and would see content through their friends’ social feeds. Beyond the core Taco Bell social audience, we targeted lookalikes and Millennials across Twitter and Facebook in order to amplify the message and broaden reach.

On Oct. 28, 2014, at 12 a.m., Taco Bell's Twitter, Instagram, YouTube, Facebook, Vine, G+, Tumblr and tacobell.com disappeared. Disappearing was not as simple as switching everything off. It had to appear natural to each environment and required us to work closely with each platform’s product teams. We relied on organic traffic along with paid social media across Facebook and Twitter to promote the solid black squares that replaced all content with the following message appearing on our channels: "The New Way to Taco Bell isn't on (social channels), it's #OnlyInTheApp" with a link to download.

Results: We achieved 2 billion earned impression in three days. Not only did our target notice our absence, but so did every major news source. We became a headline sensation. On Twitter alone, we drove over 600,000 unique engagements with our campaign. This accounted for over 390 million impressions of our total 2 billion. We achieved over 300,000 app installs from our social fans in the first two days and hit our goal of 2 million installs within just three months. Within a year, we had exceeded our campaign goal by 25%, with a total of 2.6 million+ app downloads. The Taco Bell app reached the #1 spot in the App Store Food & Drink category and made it into the top 15 apps overall during the week of the campaign.

Effie Awards are known by advertisers and agencies globally as the pre-eminent award in the marketing industry and recognize any and all forms of communication that contribute to a brand's success. Gold, silver and bronze Effie winners will be announced at the 48th annual North American Effie Awards gala on June 2 in New York.