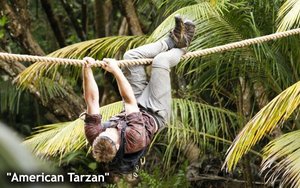 Certain characters from popular literature recur again and again in movies and TV shows -- Dracula, Frankenstein (the monster, not the doctor), Sherlock Holmes, Superman, Tarzan and maybe a few others that don’t come readily to mind. But how to bring them to life in a reality-TV format continues to present a challenge.

A new Tarzan movie -- “The Legend of Tarzan” -- comes out this Friday (July 1), and next week (on Wednesday, July 6) brings the arrival of “American Tarzan,” a survival-competition series on the Discovery Channel that aims to crown a new American Tarzan from a group of rough-and-ready competitors who have been let loose on an undeveloped South American island.

There, they will be challenged to traverse a natural obstacle course from one end of the island to the other through four “biomes” identified as “mountain,” “coast,” “canyon” and “jungle.” The first man or woman to the finish line wins.

Biomes? This word would have been incomprehensible to the Tarzan of popular culture with whom most of us are acquainted. “Me Tarzan. What is biome?” you can almost hear him saying.

The truth is, this new competition show, which I previewed this morning, is Tarzan-like in name only. The competitors -- all earnest “ordinary” people who are involved in various strength and survival sports in their regular lives -- are not seen in the premiere episode thumping their chests or summoning myriad beasts of the air, sea and land with a yell made famous by numerous Tarzans and Carol Burnett.

There is no elaborate tree house, and no one wears a loincloth. There is no female companion named Jane and no chimpanzee sidekick named Cheetah. There appears to be some vine-swinging, however -- at least in one of the photos the Discovery publicity department has made available to the media.

In these details lie the apparent reasons why you can’t really make a reality show that would be true to the Tarzan legend -- either the one from the original stories by Edgar Rice Burroughs or any of the TV or movie Tarzans either.

What sorts of tests could you put real people through that would resemble the real (albeit fictional) Tarzan? Ask them to try and attract a far-off herd of elephants by cupping their hands to their mouths and letting out a yell that echoes through the jungle? Well, you could try, but it won’t work here for several reasons, including the fact that this competition is not being held in Africa, which is the location everybody associates with Tarzan. Ergo, you’re not likely to encounter any elephants in “American Tarzan.”

With “American Tarzan,” Discovery has conjured up a survival competition show that will be of interest to fans of such things. There have been a bunch of these survival shows on TV in recent years in climates both hot (in various jungles) and cold (usually in Alaska). Discovery’s own “Naked and Afraid” comes to mind as one of the more notorious of these.

But don’t look to “American Tarzan” to fulfill any desire for a reality version of the fictional character unless the competition evolves in future episodes to encompass loincloths, jungle yells and pet primates.

Of the five indelible literary characters listed above, only one of them could really be given a reality show that might work. A show titled “American Sherlock Holmes” could set up a competition in which contestants are challenged to solve a mystery.

But a show aimed at crowning an “American Dracula” or “American Frankenstein” just doesn’t seem like a concept anyone could make workable. An “American Superman,” maybe – but only as a run-of-the-mill strength competition since no one I know really possesses X-ray vision or skin that is so invulnerable that bullets will bounce off of it.

Here’s an idea that comes to mind for a literary character that would be perfect for one of the animal channels, though: “American Lassie,” anyone?