What Was Old Is New Again: Pokemon Is Back

I never played Pokémon when I was young and never really understood what the craze was about. And while I’m not among the millions in the United States who have downloaded the Pokémon Go app, I love what Pokémon Go represents for the brand and enthusiasts. What started as a simple game from Nintendo over 20 years ago and gained a lot of followers among kids and tweens worldwide has now revived the brand with a location-based, augmented reality app. And unless you live under a rock, you will have no doubt seen the news across nearly every media outlet. Pokémon Go has made national headlines across the world in the last week.

For those who aren’t familiar with Pokemon Go is, here’s a short overview:

Once a user downloads Pokémon Go to their smartphone, they are prompted to turn on location services. Once location services are on, users will see a location-aware map with other players in the real world where they can go out and look for Pokémon characters. Once they get to a specified place, players point their phone camera to “find” Pokémon in the real world in an augmented reality-playing environment. Players then shoot a ball to capture the Pokémon and collect awards.

Why all the fuss over a “kids” game that now has a smartphone app? For starters, the app, which just launched a week ago has over 11 million daily active users. In the app world, that is rocket ship growth that any app or media property would love to have in a year, let alone a week! To provide some context, according to data from SensorTower, Pokémon Go is already bigger than the dating app Tinder, as big as Snapchat and Google Maps and about to overtake Twitter. And Pokémon Go players are spending an average of 43 minutes per day using the app. That daily usage rate outpaces WhatsApp, Instagram, Snapchat and FB Messenger! The cherry on the top is that it’s not just kids and tweens playing this game, it’s a lot of adults and new users to the Pokémon franchise.

As any marketer that has launched an app will tell you, two of the biggest success metrics for apps are downloads and daily active users (DAUs) or monthly active users (MAUs). Achieving download goals are hard enough. Many marketers spend millions of dollars just to drive downloads; it’s not uncommon for costs to hit $20 per download. The bigger challenge is getting users to actually keep using an app after download and that is where the vast majority of apps fail unless they have a high utility value (e.g., Tinder, WhatsApp, Messenger, etc.). Pokémon Go daily users are spending 40+ minutes each day!

Again, to provide some perspective, below is a chart from SensorTower showing Daily Usage Time of Pokémon Go vs. Social Media Apps. 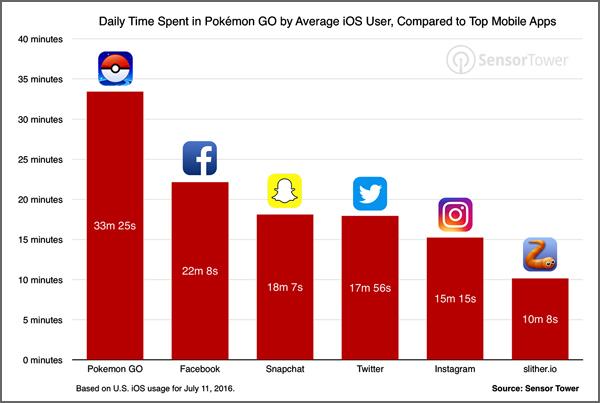 Pokémon Go news stories have been making the nightly news across all the network and cable news channels about the craze and how app users are having fun in droves as well as some questionable issues arising from playing an augmented reality game in public spaces. I was nearly shamed for not playing the game by a fellow UberPool rider earlier this week, while she was looking to snag another Pokémon in the Uber. And while I’m not playing (yet), I can think of myriad ways marketers can engage and follow the lead of the Pokémon Go augmented reality app.

On a basic level, brands with location-based presence can engage with promotions. Outdoor apparel brands could leverage the location-based aspect to engage with players in parks and resorts around the globe. QSR brands could offer a limited-time experience to help drive short-term traffic and sales goals. Marketers looking for more ideas need only to listen to what Pokémon Go players are saying on across social channels about how they are engaging with the game and what types of experiences they are creating. Smart marketers will listen and respond from the plethora of ideas being shared in the community.

While I have never been a Pokémon fan, this augmented reality app has been a great way to re-introduce adults and kids to a great brand franchise in a smart and meaningful way with a technology (augmented reality) that the average consumer has had little experience with until last week. Perhaps we’re at a tipping point for the “general release” of augmented reality for the masses.