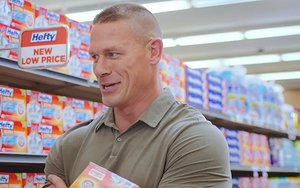 Everything old is new again. Reynolds Consumer Products is bringing back its once-popular “Hefty! Hefty! Hefty!” (and corresponding “Wimpy!Wimpy! Wimpy!”) chant for a new advertising campaign, with a modern twist.

“People still remember that chant from the ’80s,” Ecole Weinstein, group creative director at Havas Worldwide Chicago (the agency that created the campaign), tells Marketing Daily. “But it wasn’t just about bring it back; we wanted to make it relevant for today.”

In one of the ads (running in digital channels), a woman instructs her husband to pick out a box of garbage bags. When he selects the Hefty bags, he immediately turns into Cena, convincing his wife the bags have changed him by offering intimate details about their relationship. Alternately, another man picking up a box of off-brand “Wimpy” bags turns into Schneider, disappointing his wife. “She got that guy,” she says.

Other spots depict Cena’s pectoral muscles bouncing in time to the Hefty chant every time a box is scanned at the register, and Cena and Schneider encountering each other in the store aisle (ending in Schneider being run over by an elderly woman in a motorized wheel chair).

All of the spots are intentionally different to avoid familiarity, she says. “It gets away from feeling too ‘cookie cutter.’ It just feels more modern and fresh.”

In addition to television, the campaign will include digital and social media. The campaign is meant to highlight a new lower price for the brand, while communicating its continued superior strength, Weinstein says.