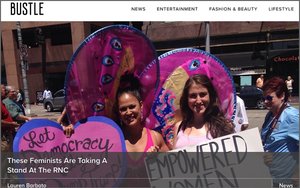 Stahl, who has been Bustle’s SVP of sales since March 2014, will be responsible for global revenue and the company's overall sales strategy. He was the first sales hire to join Bustle in 2014.

Prior to Bustle, Stahl was VP of sales at CollegeHumor Media.

“Our top priority will remain the same - showing advertisers the power of Bustle's editorial voice and how it solves a major problem for them: how to make their brand messaging relevant and authentic to tens of millions of young women,” Stahl and Chambers told Publishers Daily in an e-mail.

Mannering has been Bustle’s deputy editor since July 2013. In her new role as managing editor, she will oversee day-to-day operations of the editorial team across Bustle's five verticals: News, Entertainment, Fashion & Beauty, Lifestyle and Books. She will also oversee the company's Social and App teams. Prior to Bustle, Mannering worked at CafeMom and The Huffington Post.

Meanwhile, Alvin will oversee the editorial direction of all Bustle verticals and help develop larger-scale content packages across the site. Alvin was most recently deputy editor at Bustle. Prior to joining the company in 2013, Alvin was a senior editor at Google.

When asked what’s next for Bustle under Mannering and Alvin’s leadership, they told Publishers Daily that “we're always experimenting with new types of content in order to provide our readers with the best experience possible.”