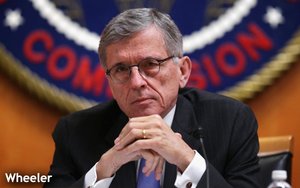 Siding against the Federal Communications Commission, an appellate court has reversed an agency order aimed at encouraging municipal broadband.

A three-judge panel of the 6th Circuit Court of Appeals ruled Wednesday that the FCC lacked authority to invalidate state laws hindering muni-broadband.

The appellate judges vacated the FCC's 2015 order on the ground that Congress never empowered the agency to trump states' ability to regulate how their "subdivisions" -- meaning cities and towns -- provide Web service. "Any attempt by the federal government to interpose itself into this state-subdivision relationship therefore must come about by a clear directive from Congress, and the FCC can only pick the decision maker here if there exists a clear statement to do so," the judges wrote.

The FCC's 2015 muni-broadband order specifically invalidated state laws in North Carolina and Tennessee, but observers said the order could have affected around 20 other states that curb muni-broadband.

FCC Chairman Tom Wheeler criticized the appellate decision, which he said "appears to halt the promise of jobs, investment and opportunity that community broadband has provided in Tennessee and North Carolina."

He added that the agency "will consider all our legal and policy options to remove barriers to broadband deployment wherever they exist so that all Americans can have access to 21st Century communications."

The FCC's original order stemmed from requests by muni-broadband providers in Wilson, North Carolina and Chattanooga, Tennessee. In North Carolina, state lawmakers imposed curbs on muni-broadband in 2011 -- several years after the city of Wilson spent $28 million to create Greenlight, a muni network that allowed consumers to obtain triple-play Web-TV-phone service that was faster and cheaper than what was available from Time Warner, the local incumbent.

In Tennessee, Chattanooga's Electric Power Board decided in 2007 to move forward with a plan to build its own fiber-optic broadband network. The city ultimately developed the first 1 Gbps broadband network in the country. Soon afterward, Tennessee lawmakers limited other cities' ability to create similar networks.

Today's ruling is a blow to the Obama administration, which had urged the FCC to invalidate state restrictions on muni-broadband. Last January, the White House issued a report touting muni-broadband networks, which often result in faster and cheaper service for residents.