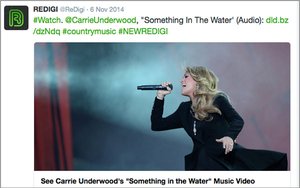 ReDigi, which once sought to create a used marketplace for digital music, has declared bankruptcy, court records show.

The move comes three years after a U.S. District Court Judge Richard Sullivan in New York sided with Capitol Records in a battle over whether ReDigi's platform infringed copyright. ReDigi recently stipulated to pay Capitol $3.5 million in damages, but also appealed the underlying copyright infringement finding to the 2nd Circuit Court of Appeals. This week, the company said in an appellate filing that it had declared bankruptcy in U.S. District Court for the Southern District of Florida. ReDigi co-founder John Ossenmacher also declared bankruptcy in the same court.

ReDigi made a splashy launch in November of 2011, when it unveiled a platform that enables people to re-sell "used" iTunes tracks.

The company said its platform scanned users' hard drives for proof that the music was acquired legally and then transferred people's tracks to the cloud, while simultaneously deleting them from the original users' hard drives.

Capitol Records sued ReDigi for copyright infringement soon after it launched. The record company argued that consumers weren't selling the same works that they purchased, but copies they uploaded to the cloud. That model is illegal, Capitol said, because only the content owner has the right to make copies.

Capitol also argued that even if the tracks are removed from users' hard drives, ReDigi has no way of knowing whether users have the files on other devices.

ReDigi countered that its business was protected by "first sale" concepts, which give consumers the right to resell products they legally purchased.

Some copyright law experts predicted from the beginning that ReDigi was likely to lose in court. Cornell law professor James Grimmelmann said at the time that courts have never interpreted "first sale" rights in ways that would allow people to make and transfer digital copies of files.

Sullivan ruled in Capitol's favor on all points in 2013. He said only a content owner can authorize the transfer of a digital music file online -- regardless of whether the  original file is destroyed. Proceedings regarding damages dragged on until June, when ReDigi and Capitol agreed to $3.5 million in damages, provided ReDigi kept the right to appeal the copyright infringement finding.