Dole Dippers Partners With Gilt As Part Of Positioning Shift 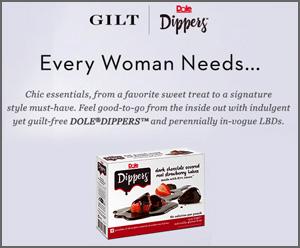 When Dole Dippers were launched in 2012, the dark chocolate-dipped frozen fruit novelties were positioned as healthy snacks.

After all, consumers were, and are, clamoring for tasty but “better-for-you” snacks, and the Dippers — which come in banana, strawberry and pineapple varieties — have relatively low calorie counts (anywhere between 60 and 120 per single serving).

The line did indeed get off to a strong start. But by 2014, sales were slowing, and not reaching the growth goals set by maker Dole Packaged Foods, says Vanessa Beltran, senior brand manager for Dole’s frozen fruit portfolio.

First, the chocolate, rather than the fruit, is the biggest draw for fans of the products. Second, they view the products primarily as frozen treats that satisfy a craving, rather than as a snack that satisfies hunger. They also perceive the treats as offering a “just right” balance of indulgence and nutrition, and praise the products’ uniqueness and premium quality.

However, it also became clear that awareness of Dippers was low, and that the packaging needed work.

The insights led the team to narrow the products’ core target audience from women 25 to 49 to affluent women 20 and up.

It also led to updating the packaging to a more premium look that emphasizes the chocolate, as well as to a shift toward creative stressing “premium indulgence” instead of “healthy snack.”

The shift was partially reflected in television ads from the Dailey agency that featured two glamorous female monkey characters enjoying the banana Dole Dippers while lounging by the pool. Those began running in 2015 and have continued into this year.

At the same time, with the new packaging now in stores, Beltran and team began working with the Legend agency on an  idea for partnering with Gilt to drive awareness and make Dippers more relevant to the new, younger target audience, says Beltran.

The genesis of the idea was fans’ observation that Dippers are a must-have, guilt-free indulgent essential — a food akin to the staple little black dress in every chic woman’s wardrobe, she explains. (While brainstorming for concepts relevant to affluent young women, #LBD, for “little black dress” was found to be an ever-popular meme.)

The “Little Black Dress” campaign will kick off with a “Chic Essentials” sale on Gilt, launching August 21 at 9 pm EST.

As the sponsor of the sale, which will offer deals on LBDs and other fashion essentials, Dole Dippers will have visibility through branded promotional banners across the Gilt site (which has microsites for kids, men, home, travel and “city,” among others).

The messaging on the ads (example above) hits all of the key concepts, stressing that “Every Woman Needs…Chic essentials, from a favorite sweet treat to a signature style must-have. Feel good-to-go from the inside out with indulgent yet guilt-free Dole Dippers and perennially in-vogue LBDs.”

Dole Dippers is also sponsoring a sweepstakes on Gilt.com with prizes including a consultation with a Gilt stylist and a $500 credit toward Gilt purchases. All entrants will receive a coupon for Dippers.

During the two weeks of the campaign, the sale and the sweeps will be promoted on both partners’ social media channels.

In addition, Dole Dippers will offer a coupon via a national newspaper FSI.