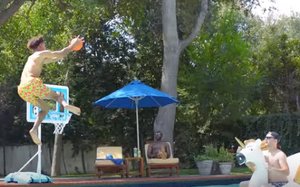 Nestle’s Nesquik is launching its first product specifically aimed at the so-called “kidult” audience: a line of high-protein flavored milk called Protein Plus.

Launched in 1948, Nesquik is attempting to expand its customer base beyond kids and the moms who buy Nesquik for them, to attract “young at heart” adults, through a campaign from digital creative agency Deep Focus.

Specifically, the brand is going after a new segment for protein drinks: “casual athletes,” or average, not-necessarily-buff guys who get a kick out of acting like teens in their leisure time.

The launch video, “Fueling the Everyday MVP” (below), spoofs clichéd, dramatic sports product ads that show professional or amateur athletes knocking themselves out at football and other intense sports. This time, guys who look to be in their mid- to late 20’s are shown enjoying the new beverage while playing games like pool basketball, Frisbee and Wiffle ball.

Nesquik is among a growing number of brands seeking to attract “kidults,” including Frosted Mini Wheats and Vodafone.

Protein Plus has now been rolled out to convenience stores and select grocery retailers, around the country.