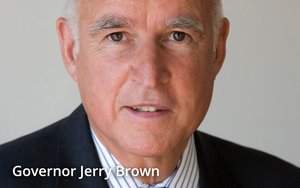 Amazon's Internet Movie Database will be required to remove information about some actors' ages, thanks to a new California law.

The measure, AB 1687, was signed on Saturday by Gov. Jerry Brown. It takes effect in January. The bill requires "commercial online entertainment employment service" providers, like Amazon's IMDbPro.com, to take down information about the ages of paying subscribers at their request.

Opponents also argue that the bill won't prevent age discrimination, especially because data about people's ages is available from other sources.

"We are disappointed that AB 1687 was signed into law," Internet Association spokesperson Noah Theran says. "We remain concerned with the bill and the precedent it will set of suppressing factual information on the internet."

Hoang, who had a professional profile on IMDb, alleged that Amazon violated her privacy by accessing credit card data to discover that she was 40 years old, and appended that information to her profile.

The actress said in her original complaint that she looked younger than 40, but could no longer get as much work as she used to because casting agents and producers -- who want to hire younger people -- now know her true age.

A jury ruled against Hoang, and last year, the 9th Circuit Court of Appeals rejected her request to reinstate the lawsuit.