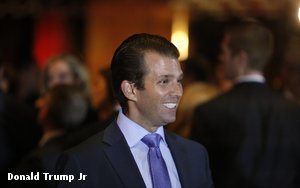 Twitter has removed an image of a bowl of Skittles posted by Donald Trump Jr., son and adviser to the GOP presidential nominee, as part of a campaign ad.

The original image showed a bowl of Skittles underneath a caption that compared refugees from Syria to candy. "If I had a bowl of skittles and told you just three would kill you. Would you take a handful? That's our Syrian refugee problem," the caption reads.

While Twitter removed the graphic, the text of the tweet is still available. "This image says it all," the Trump Jr. wrote. "Let's end the politically correct agenda that doesn't put America first."

Skittles' parent company, Wrigley, quickly criticized the tweet as inappropriate. "Skittles are candy. Refugees are people," a spokeswoman stated. "We don't feel it's an appropriate analogy."

This isn't the first time that Web platforms have taken down political ads in response to copyright complaints. For instance, before the last presidential election, the campaign for Republican candidate Mitt Romney posted an ad on YouTube that featured Barack Obama singing Al Green's "Let's Stay Together. That clip -- which only used around 9 seconds of the song -- aimed to show that Obama rewarded campaign donors. The video was only available for a few hours before the music publisher BMG Rights Management sent a takedown notice to YouTube, prompting the platform to take down the clip.