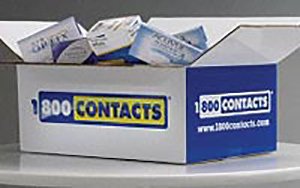 Now the company is also facing two class-action complaints by consumers who say they overpaid for contact lenses due to 1-800Contacts' alleged anti-competitive practices.

The lawsuits by consumers draw heavily on the FTC's allegations, unveiled in August. The FTC contends that between 2004 and 2013, 1-800Contacts sued or threatened to sue 15 competitors for allegedly purchasing the term 1-800Contacts as a trigger for pay-per-click search ads. 1-800Contacts argued in those matters that this use of its name amounted to trademark infringement. Only Lens.com fought the case, which ended in a ruling largely in Lens.com's favor.

The other 14 retailers agreed to restrict their use of the term 1-800Contacts in search ads, according to the FTC. Those agreements also require the other retailers to use "negative" keywords -- which direct search engines not to display ads in response to queries with the term 1-800Contacts, according to the FTC. The agency alleged that the agreements distorted prices in search-ad auctions, and also resulted in higher prices for some consumers.

Duncanson and Thompson say in their complaint that they "paid supracompetitive prices" for contacts.

"Because of the unlawful agreements, competitors could not advertise against 1-800 Contacts, and therefore customers did not receive information concerning competitors’ products and pricing," they assert. "Because of these agreements, 1-800 Contacts continued to give the impression that it was a low-cost provider of contact lenses, shielding the public from information that would have driven the price of contact lenses down."

Duncanson and Thompson also are suing some of 1-800Contacts' competitors, including Vision Direct, which allegedly entered into an agreement with 1-800Contacts.

"In a competitive marketplace, VisionDirect would have continued to compete, in both advertising and on price," the complaint alleges. "It could have covered its prices and increased its market share, taking from 1-800 Contacts."

Williams adds that the company "strongly disagrees" with claims that the trademark settlement agreements are anticompetitive. "We reject any assertion that competitors should be allowed to violate our trademark rights through paid search, and we look forward to the opportunity in court to present our position fully," Williams says in a statement emailed to MediaPost.

Courts haven't definitively resolved questions surrounding the use of trademarks in search ads. Google and Yahoo have prevailed in several lawsuits alleging that they wrongly allowed a trademarked term to trigger pay-per-click ads, as have several advertisers. But judges have let some lawsuits between advertisers proceed to jury trials.