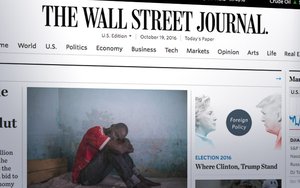 Dow Jones, a division of News Corp. which oversees The Wall Street Journal and other business publications, is planning a company-wide restructuring.

That's due to a “volatile” advertising environment, according to a union that represents about 1,300 Dow Jones employees.

The Independent Association of Publishers’ Employees (IAPE) union said in a memo that its contract negotiations with Dow Jones management was at a “crossroads” over pay raises and health care costs.

IAPE members have been operating without a contract since Oct.1.

On Tuesday, IAPE said Dow Jones negotiators backtracked on certain proposals in its latest offer, blaming “volatility in the advertising-sales market” and “no evidence that the trend will reverse.”

The IAPE union says it was told to “expect a company restructuring announcement soon.” No further details were given, but the changes will be “significantly different than the types of changes DJ has been hinting at for some time,” it said.

In the June quarter, The Wall Street Journal reported a 12% dip in domestic advertising revenue, according to a report from WSJ.

According to IAPE, Dow Jones is calling for a 2% raise each year in a three-year agreement, retroactive to July 2016, with higher costs for health care. Additionally, Dow Jones wants the option to terminate the contract for either the second or third years.

“That would mean the company's already underwhelming offer wouldn't be guaranteed after this year,” IAPE wrote.

Sources told WSJ that the potential restructuring “could include a reduction of head count across Dow Jones," as well as "combining or eliminating sections within the Journal, cutting the number of newspaper pages and closing or reducing non-core projects."

Many in The Wall Street Journal newsroom are reeling from the announcement. According to Politico’s "Morning Media," an email circulated among WSJ reporters calling the latest developments "unsettling."

"Now the question is: How far are we willing to go to keep fighting for a fair, multi-year contract? For better wages and reasonable benefits?" the email read.

This wouldn’t be the first reorganization at Dow Jones this year.

In January, the company created a new publishing unit, Dow Jones Media Group, under which existing brands, like the magazine Barron's and Web sites MarketWatch and Mansion Global, were combined.

The unit does not include The Wall Street Journal.

Dow Jones has cut 44 jobs this year, according to IAPE.
employment, management, newspapers
1 comment about "'The Wall Street Journal' Braces For Restructuring".
Check to receive email when comments are posted.
Next story loading