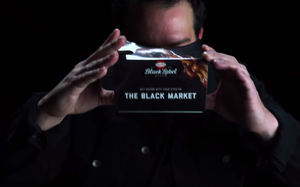 Hormel is looking to attract buzz and new customers with a virtual reality experience that lets consumers buy its Black Label bacon in an online “Black Market.”

According to the brand, this is the first mobile smartphone VR shopping experience available to consumers that doesn’t require using an app or a headset.

For the VR, users visit BlackLabelBacon.com with a smartphone and slip the phone into a slot in a free, bacon-scented Google Cardboard viewer available (in limited quantities) through the site.

Users can experience four immersive “bacon worlds” — a dark woods, a volcano, a salty sea and outer space — and, if so inclined, navigate a bacon purchase using their eyes. (See video below for a preview of the experience.)

Consumers may also view the experiences in non-VR mode by placing their phones in front of their eyes, or just viewing them on the “optimized” site. The site also offers a traditional online storefront.

The brand’s goal is to “get bacon out there in a way that hasn’t been done before,” Scott Schraufnagel, an account director at BBDO, told Minneapolis-St. Paul Business Journal.

The experience is part of a larger campaign from BBDO, “We’re Always the New Black,” which celebrates bacon innovations over the past century and new varieties of Black Label, such as double-smoked and low sodium with sea salt.

The campaign’s avant-garde videos, featured on YouTube and its other social channels, also include a 90-second musical experience from “disinformationist” Reggie Watts and 30-second  black-and-white videos “The Cave” and “The Funeral.”