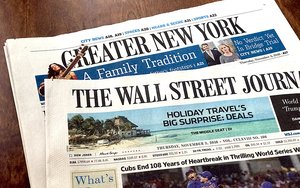 As part of a larger plan to slim down its print edition, The Wall Street Journal is downsizing its Greater New York section to make it a "more concise, focused daily report on life and business," WSJ editor Gerard Baker announced in an internal memo to staff Wednesday.

"Greater New York," The Wall Street Journal’s metro section introduced in 2010, will be cut down from six pages to two and moved to the main section of the paper starting Nov. 14.

"All newspapers face structural challenges, and we must move to create a print edition that can stand on a sound financial footing for the foreseeable future while our digital horizons continue to expand," Baker wrote.

He also added there would "be an elimination of some positions as part of this process."

The roughly 36 staffers who work on the section will be pared down to 12 reporters and four editors, per Politico’s Morning Media. The whole team will need to reapply to secure one of the new positions.

The union representing WSJ employees, IAPE, says it may challenge this process. In a memo, IAPE wrote: “The Union will fully investigate as soon as management delivers copies of layoff notices to the IAPE office. If there is any possibility that layoffs may be challenged through the grievance and attribution process, grievances will be filed immediately.”

According to IAPE, buyout requests have been approved for 48 of its nearly 500 members at WSJ.

As further buyouts and layoffs inevitably continue, the paper will feature fewer pages with less space dedicated to coverage of arts, culture and New York news, according to WSJ.

“I want to stress that these changes and their ramifications for the newsroom are necessary not just because we must adjust to changing conditions in the print advertising business, but because we know from audience research that readers want a more digestible newspaper,” Baker wrote.

Other sections undergoing consolidation include The Journal's Business & Tech and Money & Investing sections, which will be combined into a new Business & Finance section. Baker said the new section “will contain about the same amount of news space as we have now for business, technology, financial and markets coverage.”

The Personal Journal and Arena sections will be combined into a section called Life & Arts, while will move to the main section of the paper.

Baker said the new version of the paper will be “sharper, more concise, more coherent and more easily navigable form.”