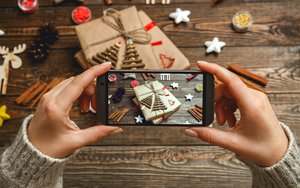 The election may be ending, but politics still isn’t a safe discussion topic around the holiday table. Using that old bugaboo, technology, at the table is even preferable to discussing politics.

According to its annual survey about technology and holiday traditions, nearly two-thirds of respondents (65%) said discussing politics around the table creates more tension than smartphone usage. The statistic is one of many showing a greater understanding and acceptance of technology at holiday gatherings.

“While the heads-down distraction of smartphones at the holiday table is frowned upon, it’s clear that politics tops technology when it comes to causing strained relations during the holiday season,” says Sequence CEO Jojo Roy. “After a long Presidential election cycle, consumers are probably ready for some pleasant diversions via smartphones, apps and other tech entertainment this year.”

In its survey of 1,000 consumers, nearly 60% of respondents felt their family and friends are conscientious about limiting their technology use during the holidays, a 20% increase over the previous year. One in five, meanwhile, said smartphones at the holiday table aren’t a big deal. (That number increases to 49% among Millennials.) This greater understanding and acceptance of smartphones could reflect how accustomed consumers have become with their presence.

“Once [consumers] have started using a smartphone, they’ve forgotten what life was like before,” Roy tells Marketing Daily. “Once the novelty has worn off, you adjust to the social guidelines of it. It doesn’t necessarily upset people or insult them if you whip your phone out and take a picture.”

Nearly 80% of consumers, meanwhile, said using technology enhances their enjoyment or relieves stress around the holidays, with 41% saying using calendar, organization and note-taking apps also do so.

However, just because consumers are getting used to smartphone use around the holidays, there will likely be other disruptive technologies that consumers will continue to feud over during get-togethers, Roy says.

“It would be weird for someone to show up with a VR headset on, but the technology may be evolving where that are or may not be so out of place,” he says.