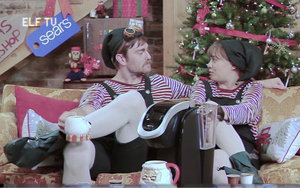 Sears is hoping to pique people’s interest in its upcoming “Elf tested. Santa approved” holiday campaign, using a series of videos that certainly can’t have had Santa’s blessing.

Called Elf TV, the approach is a little “bit of a guerrilla effort,” says Paul Hayward, Sears' chief content integration officer. “We’ve got a whole TV campaign breaking around Black Friday, and wanted to find a way to lead up to it. The idea is that these two mischievous elves go to the basement in Santa’s workshop and do a little broadcast pirating that Santa isn’t aware of.”

The retailer hired a few improve actors to film the spots, which are part Saturday Night Live’s famous “Wayne’s World” and part David Sedaris’ “Santaland Diaries.” One spot features a naughty list that includes Ivan the Terrible (“on account of torture”), corporate lawyers and a 15-year-old named Spud who’s been “pretty mean to sixth graders.” In another, elves Thumper and Gristle throw together a talk show called “Spill the Beans” for workshop gossip like “Mrs. Claus force-fed me ginger snaps.” In a third, the pair tries open-mic night on a bunch of inflatable snowmen.

“It’s all part of a bigger test-and-learn strategy we’ve been working on for the last 18 months and has been under the radar,” he tells Marketing Daily. “As we move from fixed to more variable marketing assets, we’ve been getting positive results in viewership and conversion rates.”

He says the Hoffman Estates, Ill.-based retailer is keeping close tabs on the spots, which are running in paid digital channels, including Facebook, YouTube and blogs. “We’re monitoring the way people interact with them over a 10-day period, scrubbing the data, then either reinvesting in them or not.”

Havas is the agency for both the Elf TV videos and the “Elf Tested. Santa approved” spots that will break later, but he says the two are different. Thumper and Gristle won’t appear in the larger campaign, which he says “considerably more polished and lightly humorous,” compared to schtick-y pre-campaign. “And while the elves in the large campaign don’t have speaking parts, they’ll feel like cousins.”

He says the whole principal of the video effort, enhanced for mobile, is to help the store improve its ability “to get the right message at the right time in front of the right audience. We’re hoping it’s a nimble strategy, whether we find someone shopping for work boots or washing machines.”

While holiday sales are always critical, they are especially so for the floundering Sears, which posted declining revenues and same-store sales, and a $395 million dollar loss in its most recent quarterly results.(The once-mighty retailer has seen sales steadily decline since 2005.) Fitch Ratings recently reported that Sears is a “significant default risk” within the next two years.