Can Walmart Re-Emerge As A Disruptor? 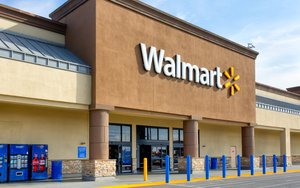 Sales are up again at Wal-Mart, and as it marks its ninth straight quarter of gains, observers are (albeit grudgingly) beginning to regard it as the disruptive powerhouse it used to be.

Revenues for the Bentonville, Arkansas-based retailer’s fiscal third quarter rose 2.5% (excluding the impact of currency fluctuations) to $120.3 billion. In Walmart stores in the U.S., sales also improved — up 2.5% to $74.55 billion, compared with $72.71 billion in the same period a year ago. Same-store sales in the U.S. climbed 1.2%.

And at its Neighborhood Market stores — a smaller, more updated grocery format — sales rose 5.2% for the quarter.

Operating income dropped 10%, however, to $5.25 billion, as the company continued to invest in efforts to bolster digital channels and to improve shopper experiences in its physical stores.

Those investments are paying off. “Walmart is in the early stages of a turnaround,” writes Karen Short, senior analyst who covers the company for Barclays, in a recent report on the grocery industry. “Labor changes are having a positive impact on morale, merchandising changes are being made, execution is improving, product quality is improving.” She points out that based on its size, any change is slow. “But once the positive momentum gains strength, it likely won’t dissipate for the foreseeable future. We also believe competitors have become somewhat dismissive of Walmart — and we believe this will prove to be a fatal strategic error.”

Digital is a big part of the progress, and while it still lags far behind Amazon, its investments, including the recent purchase of Jet.com, are paying off. “We’re scaling fast,” says Doug McMillon, president and CEO, in a conference call announcing the results,  “adding 8 million SKUs over the past three months alone.” He says e-commerce contributed 50 basis points to its sales growth, our Q3 Walmart U.S. “our largest contribution yet… . We continue to roll out online grocery and grow our pickup business in stores and clubs. We’re making progress giving our customers the seamless shopping experience they are looking for.”

“In a time of change and flux in retail, Walmart is still more than holding its own,” writes Neil Saunders, CEO of Conlumino, in reaction to Wal-Mart’s results. “They also stand in marked contrast to the more negative figures from rival mass merchant and department store retailers.”