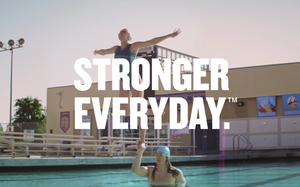 When Clay Matthews eventually decides to throw in the pro football towel, he might well be able to segue to the music biz.

The Green Bay Packers’ linebacker — who, with his teammates, sang (and danced) to “Bootylicious” in the movie “Pitch Perfect 2" — has now done a more-than-respectable job at singing “Lean on Me” in new creative for Muscle Milk.

The video/TV spots, including a 30-second version (below) and several 15’s (viewable on the brand’s YouTube channel), show the muscular Matthews giving physical assists to pro and amateur athletes, such as lifting a diver out of the water, carrying a runner on his shoulders, and literally standing (and running) behind a tennis player.

Matthews is intermittently shown drinking Muscle Milk — the intended takeaway being that the product can help active people perform optimally. The target audience is active men and women ages 18 to 35.

The “Lean On Me” creative, from the brand’s agency of record, Mekanism, is an extension of Muscle Milk’s “Stronger Everyday” ongoing umbrellas campaign, launched this past April.

The ads will run on social media, as well as broadcast television and digital, into 2017.