Good Golly, Miss Dolly! What Was Christmas Before She Came Along? 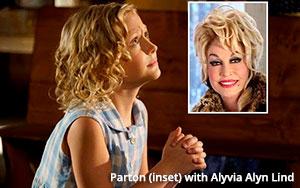 Her official crowning comes Wednesday night (Nov. 30) with her second annual TV movie on NBC. Like last year’s, which was titled “Dolly Parton’s Coat of Many Colors,” this year’s model is based on a story from her Smoky Mountain childhood.

The story has to do with plucky little Dolly and her efforts to help her father (played again by Ricky Schroder) earn enough money to buy his wife -- Dolly’s mother -- a belated wedding ring, something his wife secretly pines for.

The full title is “Dolly Parton’s Christmas of Many Colors: Circle of Love,” a title nearly as complicated as a Tyler Perry sitcom. But the point is made: This is Dolly’s show, and just to underline the point even more, she introduces it, sings in it, and even plays a cameo role.

This movie is such a down-home pleasure to watch that she can be forgiven for the incongruous role she plays -- a “painted lady” (the archetype known in the scholarship of cinema as a “hooker with a heart of gold”). In the movie, this apparent “fallen angel” sees young Dolly singing and playing guitar on a street corner and predicts great things for the child.

She also tips the kid with an ill-gotten 20-dollar bill. In return, little Dolly -- played once again by Alyvia Alyn Lind -- stares in awe at this harlot’s elaborate makeup and hair and vows to adopt the same look when she grows up.

Well, maybe the story is true. Perhaps little Dolly did become inspired by a strange woman in garish makeup whom she met on a small-town street one evening close to Christmas. As an adult music star, Parton’s devotion to hair and makeup has certainly helped her to define her brand. But who knew her inspiration was a prostitute?

At least it can be said that the Parton hooker character in this TV movie is probably the most wholesome lady-of-the-evening ever seen in a TV movie (and possibly the first ever in a Christmas TV movie).

She’s only in it for a few minutes, anyway. The rest of the movie belongs to Alyvia Alyn Lind, who -- as I noted in my review a year ago of last year’s movie -- is so charismatic that she makes Shirley Temple seem like the dullest child you ever saw. Like little Dolly, little Alyvia is going places. Fingers crossed for her.

The strangest thing about this new Parton Christmas movie is this: It’s a nostalgic movie about country people living in the mountains and foothills of Tennessee in the 1950s. They read the bible and love Jesus Christ. They grow tobacco and smoke it too. It is nothing like anything else seen currently on network television.

The woman behind this production -- Parton -- is a 70-year-old icon of country music who would appear to have no following or connection to the youngish, urban audience NBC craves. And yet, last year’s Parton Christmas movie drew more than 13 million viewers – the most of any TV movie on a broadcast network since 2012.

This year’s movie seems just as out of place, but that’s why it will probably do just as well as -- if not better than -- last year’s. Call it a Christmas miracle.

2 comments about "Good Golly, Miss Dolly! What Was Christmas Before She Came Along?".
Check to receive email when comments are posted.
Read more comments >
Next story loading