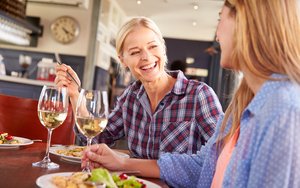 Fully 40% of U.S. consumers who buy alcoholic beverages haven’t decided what they’re going to purchase when they walk into the store, according to a new study from IRI.

Of the 60% who do have a planned beverage purchase, 21% end up changing their minds in store, and 50% of those who change their minds ultimately buy a different brand than they originally intended.

On average, Millennials, Gen Xers and Baby Boomers who are liquor purchasers buy liquor in a physical store 55 to 56 times per year — meaning, of course, that they’re making at least one, and sometimes more than one, in-store purchase per week. (Seniors buy liquor at retail 35 times per year, on average.)

All generations drink regularly both at home and at bars or restaurants, but at-home frequency is higher. On average, between 66% and 76% of consumers report drinking at home at least once a week. Millennials are at the low end of that range, followed by Gen X (70%), Boomers (75%) and Seniors (76%). In comparison, 23% to 26% report drinking on-premise at least once a week (26% among both Millennials and Boomers, 24% among Gen X, 23% among Seniors).

All of which points to “immense” opportunities for alcohol manufacturers to find new pockets of growth by engaging and influencing consumers while they’re in the store, point out IRI’s analysts.

Beer, wine and spirits manufacturers are increasingly aware of the importance of working with retailers to win over consumers, according to Robert I. Tomei, president of consumer and shopper marketing for IRI. “When you consider how often most shoppers are going to the store, and that 21% of them change their minds during the shopping trip, you realize the impact that in-store signage, creative labeling and other marketing could have on your portfolio,” he stresses.

While it’s important for manufacturers to develop a strong, sustainable connection with Millennials, many liquor manufacturers are walking away from enormous shares of consumer dollars by under-marketing to Boomers and Gen Xers, stresses the report.

Millennials’ share of liquor sales is increasing as they come of age, but Boomers are responsible for a disproportionate proportion of overall cross-category dollar sales, and nearly 50% of category volume.

Boomers represent 33% of the U.S. population (nearly as large as the Millennial generation), and 45% of overall beer, wine and spirits dollar sales, 46% of wine sales, and 41% of sparkling wine sales. They are more likely than Millennials and Gen Xers to drink once a week or more at home, and they account for 42% of overall wine category growth.

Beer, wine and spirits companies should also pay attention to Gen Xers, whose preferences, values and tastes are similar to those of Millennials, according to IRI. Gen Xers account for 21% of the U.S. population, and for a sizable 20% of total beer, wine and spirits dollar sales.

“Millennials are driven largely by factors such as alcohol percentage and flavor innovation,” points out IRI. “They are highly attracted to creative labeling, citing fun and engaging labels as criteria for an in-store purchase decision.”

For the study, IRI conducted a 15-minute online survey with 1,150 respondents, using a sample of U.S. adults of legal drinking age balanced to census on age, gender and household income. The sample was supplemented with consumers from a Research Now panel.