Donald Trump And The Fine Art Of Being Transparently Nontransparent 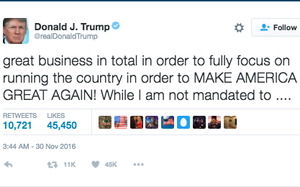 That headline is a retread of one we published in March 2013: "Irwin Gotlieb And The Fine Art Of Being Transparently Nontransparent". It was originally written to describe how the GroupM chief explained the new world order of media-buying transparency while speaking at the 4As annual conference that year. But when I started thinking about this column and how President Elect Trump’s administration is coming together, the headline seemed to fit.

“It doesn’t say in Genesis that everything has to be fully disclosed,” Gotlieb famously quipped at the conference, which I took to be a refreshingly honest view of something some believe to be dishonest. I’d love to hear Gotlieb’s views on that same subject three years later, but I’ve been thinking about the requirements for disclosure ever since -- especially during the 2016 Presidential campaign, and its aftermath.

The campaign was full of surprises. So is its aftermath, especially the process of Trump assembling his cabinet and filling out key members of his administration. While many of the appointments have the appearance of undisclosed patronage bordering on cronyism (c’mon -- Linda McMahon as head of the Small Business Administration? That’s a storyline I wouldn’t have believed even if it was delivered as part of a WWE script). it is the role his family will play that truly raises questions about transparency. It’s not the nepotism of it. It’s the conflict of interest.

It was just about a week ago that Trump tweeted he would leave his business “in total.” Now it seems he will not only leave it intact, but that his family may play an active role in the administration too. Among other things, he has suggested his son-in-law Jared Kushner could play a diplomatic role negotiating a Middle East peace accord between Israel and the Palestinians.

Why is this commentary relevant to people in the media and advertising business? Aside from the fact that we are all citizens of the country Trump wants to run like his family business? Because it is partly a media issue. The latest news that Trump will retain his role as executive producer -- as well as an equity stake in -- NBC's new "Celebrity Apprentice" -- just blurs the lines between Trump, Trump's business, the media business, and well, reality, that much more. Some people may call that "reality TV." I've got another name for what's going on. I call it, surreality TV.

Meanwhile, I think there is something else the media industry -- at least the part that publishes news, and I mean real news -- should be doing when covering the not-so-transparent lines separating Trump's presidency and Trump's business. They need to describe those lines as clearly as possible, beginning with how they refer to the role other top executives in the Trump Organization play inside and outside the Oval Office.

Instead of referring to the role Donald Jr., Ivanka and Eric play in his administration as “his children,” the media should refer to them by their corporate titles. They are each executive vice president of the Trump Organization.

Calling them “children” normalizes their influence in the administration like it is part of a traditional “first family” role. It’s important that they are characterized as corporate officers of a multibillion-dollar, multinational corporation that have unbridled access to the executive office.

If there is a bright side to the nontransparency of the Trump administration, it is that it is being completely transparent about it. If there is a downside, it’s that so far, it doesn’t seem to matter.
politics
2 comments about "Donald Trump And The Fine Art Of Being Transparently Nontransparent".
Check to receive email when comments are posted.
Read more comments >
Next story loading