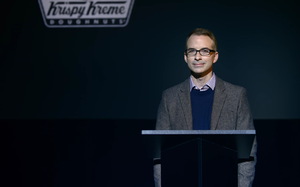 Krispy Kreme Doughnuts is humorously hyping the importance of its latest product — a Nutty Cocoa Ring that’s topped with Nutella — with a video announcement that parodies Apple’s new-product media events.

The 30-second video (below) opens with a title card that promises “A special announcement from Krispy Kreme.”

It then cuts to an actor (Brian LaFontaine) who looks not unlike Apple CEO Tim Cook, striding across a darkened stage amid flashing spotlights, smoke effects, and dramatic music.

When he reaches a lectern — the only object on the stage — he makes a 10-word pronouncement: “We have a new doughnut. It has Nutella on it.”

Then he exits, as a slide behind him shows the “Nutty Coca Ring, topped with Nutella,” and the hashtag #EasiestSellEver.

As of early December 19, the video, posted on Dec. 15, was showing more than 13,000 views on YouTube. It was also embedded on Krispy Kreme’s Twitter page on December 16. The brand’s Instagram account is showing a series of partial images of the new donut that visually combine to depict the whole pastry.