'Inc' Mag Has Most Profitable Year In Decade 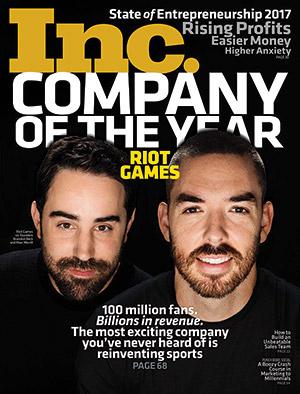 2016 is proving to be Inc.’s most profitable year since billionaire entrepreneur Joe Mansueto bought it in 2005.

CRO John Donnelly pointed to a list of positive numbers for the publication, which focuses on content for entrepreneurs, start-ups and small business, as evidence that Inc. is “the fastest-growing business property in the US.”

Web traffic is up 110% from two years ago and page views are up 105%. Video views have risen 68% this year. Inc.’s print magazine audience grew 9.1% since last year, according to data from market research and consulting firm Ipsos.

Interestingly, 42% of Inc.com’s traffic came from outside the U.S., mostly from the U.K. and Europe, without any marketing to this region, Donnelly told Publishers Daily. This is a market share that Inc. plans to tap into in 2017. The company is opening an office in London to cover EMEA and is attracting interest from advertisers in Europe, he said.

Inc. will create a team of 30 international contributors and dedicate a portion of the site to international and global entrepreneurship.

Donnelly started as publisher of Inc. in 2014, and when he became Chief Revenue Officer last year, his responsibility “was to form a strategic plan and enable growth,” he said. He and the sales team plan to diversify the company’s offerings to grow its audience and traffic, as well as leverage Inc.’s events business.

He emphasized a pivotal decision that led to the company’s recent success: It increased ad pricing. He said prices were too low, which he knew from his experience as account director at Fortune.

Donnelly said Inc has raised its prices for three straight years, across digital advertising, sponsors of the brand, sponsors of events and event attendees, and advertising in the magazine.

Since Donnelly stepped in, the company also launched a contributor network, bumping up their production from 25 articles a day up to 100. Inc. hired a social media team to “get more eyeballs on the content,” a huge factor in the growth of its numbers.

Another major factor was that entrepreneurship is “on fire” right now, giving Inc. an advantage in its focus on small-business owners, while other business publications in the market cater to “athletes and entertainers,” he said.

“The timing was particularly good because there is a lot of contraction in the marketplace,” Donnelly added.

In 2017, Inc. plans to take a more aggressive approach to programmatic advertising, as well as roll out two or three new offerings for its content creation service BrandView.

Inc. secured 88 new advertisers this year, and the deal size was up 21% year-over-year.

As for Inc.’s magazine, Donnelly said print “gets the most criticism, but it's the most curated premium content, where our editors provide a variety of valuable information to our readers.” While print circulation was flat this year, the company is thinking about creating a new marketing service for its print business next year.