Gillette Welcomes Consumers Back To Brand 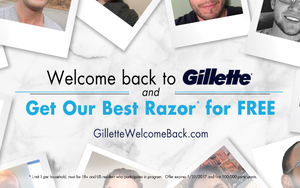 Losing customers is tough, but welcoming them back can be quite pleasing.

Having lost customers to disruptive upstarts such as Harry’s and Dollar Shave Club, Procter & Gamble is welcoming them back to the brand via a digital marketing campaign that has been particularly well received.

“We looked at social media and saw comments from consumers [that said] many of them were unhappy with these competitors,” Barbara Diecker, communications manager at Gillette, tells Marketing Daily. “More than half of men who purchase from Harry’s never purchase from them again. We started wondering where they go.”

The effort, which launched on Dec. 14, features the photos and stories of customers who left Gillette, only to return when they found the quality of these disruptors didn’t compare to their previous brands. Using digital media, the company asked people to tweet the reasons they were leaving one of the discount brands, and included them in a video on the campaign’s microsite using the theme song from ’70s sitcom “Welcome Back, Kotter.” The video also includes photos of these returners and explanations about why they came back, such as “kept getting nicks and cuts” and “the blades didn’t last as long.”

The brand took the stories from social media and solicited new ones on their “Welcome Back” Web site. Within two days of its launch, the site received 100,000 submitted stories, causing Gillette to double the number of free razors it would give away as part of the promotion, Diecker says. While the company may or may not continue to increase its free razor giveaway as more consumers come back, it will continue to use their testimonials to promote their products.

“The passion of the people coming back is powerful,” she says. “There’s nothing more powerful than guys telling other guys why they came back.”