Athleta Taps World's Oldest Yoga Teacher For 'Power Of She' 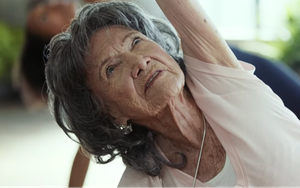 Athleta is out to stretch its definition of feminine fitness even further, with a new marketing campaign starring Tao Porchon-Lynch, a 98-year-old teacher. The new work, an expansion of the “Power of She” effort launched last year, highlights the power that comes from women working together to create change, including a group of moms running to raise funds for maternal health care, women teaching yoga to kids with Down syndrome, and a photographer who unleashes athletic confidence in young girls.

It’s the latest bid from the Gap-owned retailer to build muscle in the increasingly crowded women’s athletic and athleisure space, where brands like Lululemon, Sweaty Betty, and Fabletics are duking it out with such womenswear giants as Nike, Under Armour and Reebok. It also comes at a time when NPD Group reports that Americans are shifting their shopping preferences, becoming more likely to pick up performance-wear at department stores and mass retailers than at specialty stores.

NPD, the Port Washington, N.Y.-based market research company, says that as more brands compete in the crowded category, activewear dollar sales grew 5% in department stores and 3% in national chains through August 2016, but fell in athletic specialty and sporting goods stores.

“There is a lot of noise in the activewear market right now, as more manufacturers are marketing products that originally weren’t considered active or athletic apparel,” writes Matt Powell, NPD’s VP/sports industry analyst, in the report. “Because activewear is so broadly used, available, and defined by the sports and fashion industries, some of the bigger, authentic brands are feeling pressure.”

To stand out, Athleta is looking to deepen its emotional connection with women. "We want to break down stereotypes and help redefine perceptions of wellness and strength while celebrating the power of the female collective to make an impact," says Athleta President Nancy Green, in its announcement.

The campaign is primarily digital, although the stories get prominent play in the print catalog: Porchon-Lynch is on the cover, smiling and relaxed in a flawless elevated lotus pose. Extended video versions of the stories are also on its Chi Blog, with promotions running in its 130 stores.

Separately, the retailer also says it is signing on with the #SeeHer movement, launched last year by the Association of National Advertiser (ANA)'s Alliance for Family Entertainment, with the goal of creating a 20% increase in the accurate portrayal of women in media by 2020. Athleta says the ads from its “The Power of She” campaign measured in the top 1% of some 10,000 ads ranked for the way they portray women and girls.