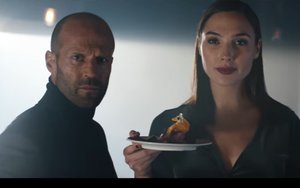 For its third go-around at Super Bowl advertising, Wix.com has it all: big stars, epic action and the little guy triumphing in the end.

The Web site-hosting company debuted its spot this week on YouTube and Facebook Live to build anticipation of the big event. The spot features action stars Jason Statham and Gal Gadot wreaking havoc in a restaurant.

“As our storytelling has become more sophisticated, we were determined to feature the Wix customer at the heart of this campaign,” company CMO Omer Shai tells Marketing Daily. “Our focus is to have people easily interact with the brand through various channels. We are very excited to turn the focus on our product and our users.”

The spot was directed by Louis Leterrier, who has worked on films such as “The Transporter,” “The Incredible Hulk” and “Clash of the Titans.” In the commercial, a chef dons a pair of noise-canceling headphones and sits down in front of a laptop to design his new Web site. As he works, Statham and Gadot dispatch many foes (and take care of several customers), ultimately destroying the place. When the chef sees what’s happened to his store, Gadot asks to have her dessert to go, sending the chef on a new career path.

“The narrative of this campaign is that our customers are the heroes and we are always here to enable them,” Shai says. “While Jason Statham and Gal Gadot bring serious action and obvious star power to the spots — it is Felix, our customer, that is the center of attention.”

In addition to the Super Bowl spot, the campaign will also include several other spots featuring Felix, as well as a global digital marketing component and user engagements, contests and other game-day activations, Shai says.

“We are also aware that our users engage with us through social channels so this made sense  — millions of people have already viewed the campaign and there is so much more to come over the next few weeks in the run-up to Game Day,” he says.