Vionic Shoes Walk Toward Fashion, Away From Pain Relief 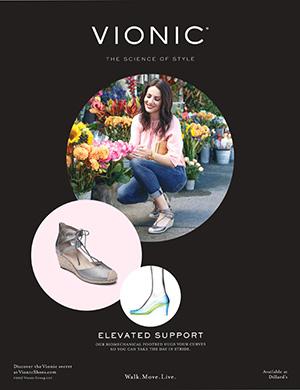 Vionic Shoes wants to put its best foot forward, repositioning itself from a shoe that relieves pain to one that can run with the fashion crowd.

The orthotics brand, which built its reputation on providing plenty of arch support, is rolling out a new campaign, themed “The Science of Style.” And while it competes with such more-comfy-than-cute names as Dansko, Hush Puppies, Birkenstock and Dr. Scholl’s, the print campaign is intended to add some fashion flair. While the ads have a small inset that shows its “orthaheel,” they feature lifestyle photography and are running in style magazines, including O and In Style. Different versions feature flats, wedges, booties and espadrilles.

The San Rafael, California-based company says it is spending more than $1 million, making it its biggest campaign ever. It’s the first effort for Vionic from Brand Zoo, San Francisco.

While it certainly isn't the first time an orthotics-type shoe is trying to shake its frumpy image, it’s clear brands are looking for new ways to stand out. Dr. Scholl’s, for example, teamed with J. Crew last year for an exclusive line, updating the classic Exercise Sandal in gingham and madras plaid. (Dr. Scholl’s is owned by Caleres, formerly Brown, which also owns such, brands as Sam Edelman, Via Spiga, Naturalizer and Rykä.)

Americans spend about $76.1 billion on shoes each year, according to Euromonitor, with about 39% of that spending on sports footwear. And with the current “athleisure” trend still going full speed, comfort in shoes is becoming more important to consumers.

Vionic was founded by Australian podiatrist Phillip Vasyli, introduced in that country in 1991, and then in North America in 2007. The niche brand made international headlines in 2015 when the founder was stabbed to death in his home in the Bahamas. His wife, Donna, was convicted of the murder, and sentenced to 20 years in prison.