For First Date With Oscar, Walmart Is All About Storytelling 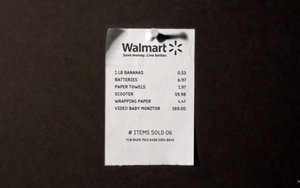 Walmart is advertising on the Academy Awards for the first time, and hoping to make a “Best picture”-level splash: Four directors are making short ads based on the same Walmart receipt.

Starting with a bunch of bananas, paper towels, batteries, a scooter, wrapping paper and a video baby monitor, “we want to show people that there’s a story behind every receipt at Walmart, and that ordinary purchases can turn into something interesting,” says Kirsten Evans, Walmart’s SVP/marketing. “Since it’s the first time we’ve been a part of the Oscars, we want to create a big brand moment for us, and a big entertainment moment for the audience.”

Each of the directors—Antoine (“Training Day”) Fuqua, Marc (“Monster’s Ball”) Forster, and the team of Seth Rogen and Evan Goldberg (“Sausage Party”)—were given “brand guardrails,” she tells Marketing Daily. And they worked with us and our ad agency on the overall concept.” But beyond that, she says there were few restrictions. “It was important to us to let the creativity of the filmmaker come to life, to show us something we had never imagined for our brand.”

The company has made a video to tease the spots, and says that each will be 60 seconds long, and break on the Feb. 26 broadcast.

Evans says the big move toward Oscar isn’t so much about reaching a new or different audience for the Bentonville, Ark.-based retailer, “but more of us trying to reach our audience in places where we know they are most engaged. We want to put our brand in places that are passion points, and entertainment is an important one.”

Walmart is also using its multi-year sponsorship to bolster its arts support, making a $250,000 donation to The Academy Grants Program for FilmCraft, in the participating directors’ names. Walmart, which says the grant is part of its commitment to diversity in filmmaking, is taking some guff in the Twittersphere for only choosing men. “We tried, and did reach out to some women directors,” says Evans, “and it just didn’t work out, mostly due to scheduling.”

She says plans for social media engagement during and after the broadcast are still in the works.

Walmart’s decision to push into Hollywood’s red-carpet country isn’t just about Oscar. The company, which is a co-founder along with actress Geena Davis of the annual Bentonville Film Festival, is also sponsoring the Essence 10th Black Women in Hollywood Awards & Gala.