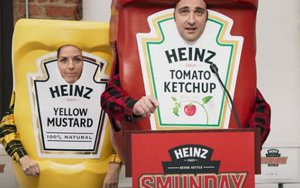 Heinz has started a Change.org petition to get the Monday after the Super Bowl designated as a national holiday.

In the past, this would have been viewed as a tongue-in-cheek brand engagement ploy. But these days, who’s to say what’s implausible?

Heinz, which has dubbed the would-be holiday “SMunday,” starts its petition by declaring: “At Heinz, we believe in never settling. Never settling with food. And never settling in life. We can all agree that going to work the Monday after the ‘Big Game’ on Sunday is awful. So as far as we’re concerned at Heinz, we as a nation should stop settling for it being the worst work day of the year…”

The brand states that if it gets 100,000 signatures, it will send the petition to Congress.

The video announces that Kraft Heinz is leading by example by giving all employees in its U.S. offices the day off on Super Bowl Monday, Feb. 6.