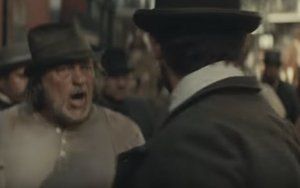 In a theme that couldn’t be more timely, the normally uncontroversial Budweiser brand is betting on a 30-second Super Bowl spot that tells the story of company co-founder Adolphus Busch’s emigration from Germany to America in the mid-1800’s to fulfill his brewing dreams.

The spot’s theme already had been revealed by A-B InBev, but the company publicly unveiled the actual ad (below) — called “Born the Hard Way” — today, posting it on YouTube and its Twitter page.

Among other scenes, the spot shows the newly-arrived Busch being verbally attacked (“Go back home!”) and jostled by rough-looking types on America’s city streets (above).

It remains to be seen how the divided U.S. populace will receive the Super Bowl spot, which was obviously a fait accompli before the events that were triggered this week by the new administration’s ban on immigrants from seven predominantly Muslim countries.

But executives from the brand and the creative agency, Anomoly, certainly didn’t play down the theme in statements accompanying the ad’s pre-game release.

"This commercial shows the start of Budweiser’s journey, and while it is set in the 1800's, it's a story we believe will resonate with today's entrepreneurial generation — those who continue strive for their dreams," said Ricardo Marques, VP of Budweiser.

“When Budweiser told us they wanted to celebrate those who embody the American spirit, we realized the ultimate story lived within their own brand history,” added Anomaly global chief creative officer Mike Byrne. “Adolphus Busch is the hero of the Anheuser-Busch American dream story, which makes him the perfect protagonist.”