Cover Story: Give Me Liberty, Or Give Me Trump 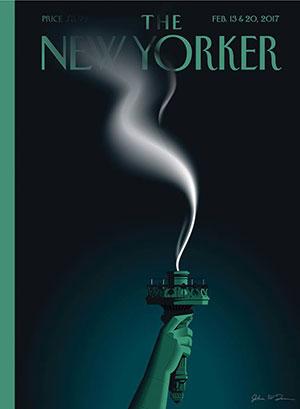 From his first full day on the job, Donald J. Trump made magazine cover play an important issue of his presidency, falsely boasting to members of the intelligence community that he held the record for Time magazine covers. In his second week on the job, he ignited a flame of magazine cover treatments, and in at least one case, extinguished it too.

This week’s cover of The New Yorker features an illustration entitled “Liberty’s Flameout,” and shows the Statue of Liberty’s torch raised, but burned out.

One of the things making the magazine cover so noteworthy -- aside from being one of a spate of covers depicting Trump’s assault on Lady Liberty -- is that it was the first time in 92 years that The New Yorker bumped a trademark treatment of monocled dandy Eustace Tilley from the cover of its anniversary issue.

"It used to be that the Statue of Liberty, and her shining torch, was the vision that welcomed new immigrants. And, at the same time, it was the symbol of American values," illustrator Tomac adds. “Now it seems that we are turning off the light."

It is not the first time editors have played covers depicting Trump assaulting Liberty. And though the publication of its December issue preceded Trump’s immigration and refugee ban orders, the New Republic’s depiction of Trump as the Statue of Liberty, thrusting his middle finger in place of the torch of freedom, may have expressed the sentiment of magazine cover editors best.
3 comments about "Cover Story: Give Me Liberty, Or Give Me Trump".
Check to receive email when comments are posted.
Read more comments >
Next story loading