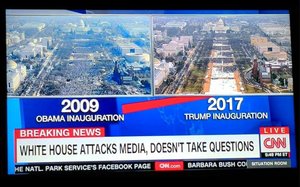 In his first full day as President, Donald Trump escalated his war with the media over their coverage of -- of all things -- his audience estimates.

The day began with Trump using his first official stop -- an address to the intelligence community at CIA headquarters -- to rip news media coverage of the less-than-huge turnout of his inaugural parade and address.

That was followed by Press Secretary Sean Spicer summoning the White House press corps for a statement that turned into a warning about their coverage of the inaugural turnout.

"We had a massive field of people. You saw that," Trump said spontaneously, while addressing the intelligence community. "Packed. I get up this morning and I turn on one of the networks and they show an empty field. I said, wait a minute, I made a speech, I looked out -- the field looked like a million, a million-and-a-half people. They showed a field where there were practically no one standing there. And they said, 'Donald Trump did not draw well'."

Trump then groused about a network that reported only 250,000 people attending his inauguration, which he said was a lie.

Trump then said, it was almost raining. The rain should have scared them away, but God looked down and he said, ‘We’re not going to let it rain on your speech.’

Turning his attention to some print media exposure, he cited an incident with a Time magazine reporter whom he said falsely reported he had a bust of Martin Luther King, Jr. removed from the Oval Office. Inexplicably, he then began gushing about the number of times he’s been on the magazine’s cover.

“I have been on their cover like 14 or 15 times. I think we have the all-time record in the history of Time magazine,” he said. “If Tom Brady is on the cover it’s one time because he won the Super Bowl or something. I’ve been on the cover 15 times this year. I don’t think that’s a record that can ever be broken.”

Later on Saturday, Spicer held an impromptu press briefing, warning members of the press corps he said were “engaged deliberately in false reporting.”

"For all the talk about the proper use of Twitter, two instances yesterday stand out," he said, citing the Time magazine reporter’s tweet about the removal of the bust of Martin Luther King Jr. from the Oval Office, which Spicer called “irresponsible and reckless.”

"Secondly, photographs of the inaugural proceedings were intentionally framed in a way, in one particular tweet, to minimize the enormous support that had gathered on the National Mall,” he said, explaining the photographic images distorted the size of the crowd. It was the first time a U.S. inauguration used “floor coverings” to protect the grass on the mall — and it "had the effect of highlighting any areas where people were not standing, while in year’s past the grass eliminated this visual."

Spicer then charged “inaccurate numbers involving crowd size” were also tweeted, adding: “No one had numbers, because the National Parks Service, which controls the National Mall, does not put any out.”

The National Parks Service had its Twitter account suspended and then reactivated, with an apology for retweeting a tweet from a New York Times reporter showing side-by-side photos of Obama’s and Trump’s inaugural audiences.

“This was the largest audience to witness an inauguration -- period,” Spicer asserted. “Both in person and around the globe.”

According to estimates released Saturday by Nielsen, it was far from the largest audience watching it on U.S. TV. Trump’s inauguration ranked as the fifth-most-viewed inauguration, after Ronald Reagan, Barack Obama, Jimmy Carter and Richard Nixon.

Spicer asserted “these attempts to lessen the enthusiasm of the inauguration are shameful and wrong” and said the media should actually be covering the fact that some media are “sowing division” with “tweets and false narratives.