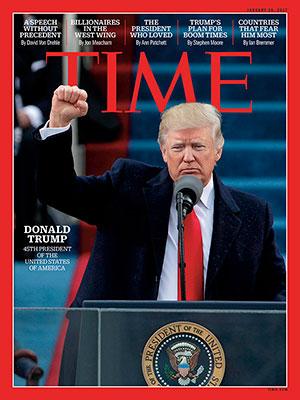 Even after watching wall-to-wall TV coverage, and incessant updates in your newsfeed, there is something about seeing Donald J. Trump’s inauguration image — fist pumping skyward — on the cover of Time magazine that makes it definitively real that he is the 45th President of the United States.

“In 16 mostly harsh, mostly confrontational minutes, Trump laid out a view of America’s destiny and place in the world that would alienate his predecessors dating back to Theodore Roosevelt and beyond...

"It may go down as one of the most consequential — or one of the most misleading — speeches in the history of presidential inaugurations,” Time’s David Von Drehle writes in the magazine's cover story, which hits newsstands Monday.

“Newly sworn into office, Trump announced a U-turn in the foreign policy that has defined America’s place in the world for more than 70 years,” Von Drehle continues.

“And while he was at it, he savaged the record and the motives of a large number of the men and women seated around him on the West Front of the Capitol. For all his reputation as a builder, he entered office as a wrecking ball….

"American power, Trump suggested, is a mirage. What happens abroad is a distraction from what matters at home. And the United States should look with suspicion, not pride, on the success of its allies and trading partners. In a zero sum world, we either win or lose.”